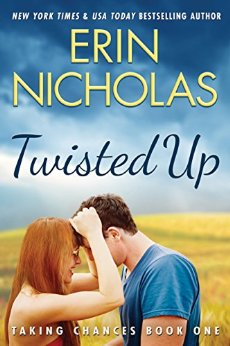 The forecast in Chance? Stormy, with a chance of love.

After the small farming community of Chance, Nebraska, is torn apart by tornadoes, three cousins return home to help the town recover from the disaster—and reunite with old loves in the process. Back in the town where they shared everything from Little League to prom, each cousin is put back in the path of the one who got away. When the wind picks up, can their relationships pick up where they left off? With humor and heart, these sexy, feel-good romances invite you to experience the kind of love that can weather any storm.

Book One, Twisted Up, coming August 23rd from Montlake Romance

Avery Sparks is a master at controlling chaos—and she gets plenty of opportunities as fire chief and head of emergency management in her hometown of Chance, Nebraska. The only thing she can’t seem to control are her feelings when she’s around Jake Mitchell, the man who was her firsteverything the night of their high school graduation. But Jake was so quick to leave Chance—and Avery—behind that she swore she’d move on.

While Avery’s job is to minimize drama, Jake embraces the chaos of an emergency. After enlisting in the Army National Guard, Jake became a nationally recognized leader in disaster recovery. Yet a life on the road has left him restless. So when a class-four tornado wreaks havoc on Chance, he’s eager to return home—and to the woman never far from his mind.

Now, Avery and Jake must team up to help their hometown weather a siege of violent storms. But it’s clear to them both that nature isn’t the only force they’ll have to reckon with. Will Avery and Jake’s whirlwind love affair be an all-new disaster—or can they recover from their stormy past to build a future together?

She looked up and frowned at Stacey’s wide eyes and breathlessness. “Everything okay?”

Was there a shortage of salad dressing? Were the potatoes undercooked?

God, for five minutes she’d forgotten about him.

Or had stopped wondering where he was and what he was doing anyway. Now he was front and center in her consciousness again. Dammit. It was her fault that this was big news. But she’d wanted to be warned, not reminded every ten seconds. “The girls told me.”

Avery felt her heart begin pounding and she suddenly felt a little breathless herself. She pressed her hand to her chest. Oh, crap. She wasn’t ready after all. “Like here at the school?”

She pivoted quickly to look around, but she forgot she was holding a streamer. It moved with her, sliding over the tablecloth… and tipping the Mason jar and candle over in the process. Avery reached to right the jar, but not before the flame touched the tablecloth.

Suddenly the entire middle of the table was on fire.

“Dammit!” Avery whipped the cloth to the floor and reached for the water bottle she’d set on the edge of the next table. It was empty. “Dammit!”

She was the Fire Chief. She could not be responsible for burning down the school. Avery pivoted to run for the kitchen and the fire extinguisher they kept inside the door.

But she ran right into a solid chest.

Even in that split second and before her mind really engaged, her body recognized it was pressed up against Jake Mitchell. Awareness flooded her system and she felt like she’d just downed five cups of espresso—jumpy with more energy than her body could contain.

He was here here alright.

She quickly stepped back and opened her mouth, with no idea what to say.

Jake said nothing either. But he raised the extinguisher he’d been holding at his side.

She couldn’t deal with two disasters at once, so she grabbed the extinguisher, pointed it at the tablecloth and sprayed. A moment later the fire was out.

She stood staring at the white cloth with the huge black hole in it, the confetti scattered everywhere, the white foam… and knew she’d still rather be looking at that and worrying about clearing the smoke smell from the room before the party started, than turning around and looking at Jake.

But she was going to have to turn around. She knew that he’d stand there—likely smirking—until she did.

“It’s not every day that you get to hand an extinguisher to the Fire Chief to put out a fire that she started.”

Of course that was the first thing he’d say. Jake Mitchell was good looking, charming, sexy, funny, and certainly not a gentleman in any way.

She pasted on a smile and turned. “Hi, Jake.”

God, he looked good. He’d dressed up for the reunion. He wore black pants and a deep blue dress shirt, a few shades darker than the royal blue of their school colors. His tie was a mix of geometric shapes in black, gray and blue. The blue brought out the deep sapphire color of his eyes—it sounded cheesy even in her mind.

Avery struggled to maintain her composure. She hadn’t seen him in two months. Two months and six days.

She was also ticked she knew that.

For nine years they’d had a no-contact-no-conversation rule. It had been a good rule. During those nine years she hadn’t run into doors because she’d been distracted by looking around for him, she hadn’t dreamed about him at night, and she definitely hadn’t lit anything on fire.

Then a year ago—June 14th to be exact—Chance, Nebraska had been hit by an EF4 level tornado.

And Avery had been hit by the realization that for nine years, she’d been lying to herself about not caring about or being attracted to Jake…

Click for an EXTENDED EXCERPT… chapter one of Twisted Up! 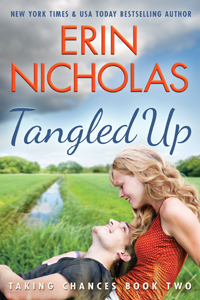 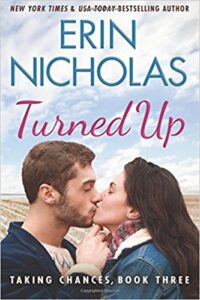