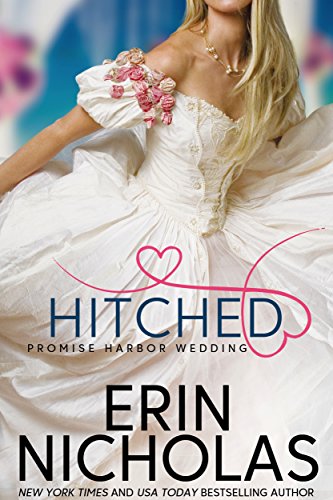 And she thought the bridesmaids dresses were her biggest problem…

But Allie’s determined to restore her family’s happiness, and if tying the knot with longtime family friend, Josh Brewster, is the way to do it, then she’ll walk down that aisle, toss that bouquet and drink that champagne.

There’s only one thing that could get Gavin Montgomery back to Promise Harbor. And she’s about to say I do to another man. Now he’s back to claim what’s his—even if he has to do it in the middle of her wedding.

Allie is shocked—and okay, a little turned on—when Gavin literally sweeps her off her feet. Safe in his arms, she succumbs to fatigue, stress, and yes, the champagne, only to wake up in his bed. In Alaska.

Now that he’s put four thousand miles between Allie and all her responsibilities, Gavin’s determined to show her that they can make a life together. If he has his way, the next wedding Allie will be planning will be theirs.

Warning: Contains a guy so in love he’s willing to break up the wedding of the season, a bride who just needs to get to, well, anywhere else, and enough hot sex to take them from New England to Alaska and back again.

Gavin headed for the rental car, mostly because he had no idea where else to go. It was right in front of the church, parked crookedly at the curb, the keys still in the ignition.

Just how he’d expect someone to park who was about to break up a wedding and steal the bride.

Break up a wedding. Steal the bride.

Hell. What had he just done?

Had he really just carried Allie out of her own wedding?

Gavin felt a trickle of sweat slip down his back—and it wasn’t that hot out here.

And looking down at the woman in his arms, he knew he would do it all over again.

It was moments like this that being a selfish bastard—as his father so eloquently put it—was a good thing. He wasn’t going to lose any sleep over Josh Brewster and the wedding without a bride. Maybe Josh really loved Allie. Maybe his heart was in pieces right now. But Gavin didn’t really care. This was about him and the fact that he was in love with her. Josh was on his own.

Yanking the passenger door open, he nudged Allie inside and slammed the door before jogging to the driver’s side. He slid behind the wheel, shifted into drive and pulled away from the curb, aware of Josh’s angry presence by the church’s side door. Gavin kept his eyes on the street until they were a block away, then he glanced over at Allie. She was watching him with those big green eyes that had made him mush for years.

“You okay?” he asked, giving her a little smile. She would be if she wasn’t now. He’d make sure of it.

“Strangely enough, I think I might be,” she said.

One corner of her mouth curled up at the corner and Gavin knew he was right to interrupt the wedding. It wasn’t like declaring that he still loved her and wanted her back could have really waited until after the wedding.

“Like the dream I had where you came home and swept me off my feet finally came true.”

Those words were clear and they punched Gavin in the gut. “Yeah?” he asked gruffly.

He couldn’t believe he’d been within minutes of losing her for good. He took a deep breath. He’d come here to tell her how he felt, to beg her not to get married.

The not-getting-married thing seemed taken care of. For now anyway. Now for the I-was-stupid-to-let-you-go speech. “Allie, I…”

“A cheeseburger. With bacon.”

He couldn’t help his smile. Allie was one of those girls who could eat like crazy and never gain weight. Then he frowned. She’d never been this skinny though. She hadn’t been eating any bacon cheeseburgers lately.

Her eyes widened. “Well, thanks.”

“Seriously. Did you sleep last night?”

“And you haven’t eaten?”

She shook her head. “Couldn’t.”

“But you’ve been drinking.” It had been clear in the church in the way she’d slightly slurred her words.

“Champagne.” She spread her arms wide. “Happiest day of my life.”

That champagne was playing a huge part in her leaving the church with him.

Gavin shoved one hand through his hair, taking a corner too fast. He knew that her state of mind came, at least in part, from a bottle and knew that he should be torn about that. But he wasn’t. He’d had to get her out of that church. At least long enough to tell her that he was still in love with her.

“How’s your head?” he asked. Surely she was feeling the effects of the night before. On the phone it had been clear she was drunk. But he hadn’t been able to help the thump of his heart when he’d heard her voice—and the words to the song.

“Swimmy,” she answered, wrinkling her nose again. “Is that a word?”

He shook his head with a slight smile in spite of knowing he shouldn’t find this funny. “I don’t think so.”

“Well, that’s how it feels,” she said. “Like my words are swimming around and around. Like they can’t find the way.”

A cheeseburger he could do. That was now the plan—focus on one thing at a time.

“Can we grab my bags out of my car?” she asked. “I’ve got crackers in there. And Twizzlers. And a Snickers. And lip gloss.” She rubbed a finger over her bottom lip as if being without lip gloss and licorice was the biggest problem in her life. She grabbed the bottom edge of her bra through her dress and wiggled it. “I need a different bra, too. Bernice picked this one out.”

Gavin wasn’t sure what that had to do with anything. “Al, I can…”

She reached up and pulled her veil from her hair, then looked down at her dress, lifting the skirt with her hands. “I need a brush and some different clothes.”

Finally, he just grinned. With that list, how could he doubt she needed her bags? And he was on board with her not needing to keep the dress on. That was a good sign she didn’t intend to go back to her wedding any time soon. “You bet. Where is it?”

“It’s right by the north door of the church. The blue Focus.”

Right. Her car would be at the church. Great.

Praying for a little divine intervention—that he was pretty sure he didn’t fully deserve—he took a left and headed back for St. Mark’s.