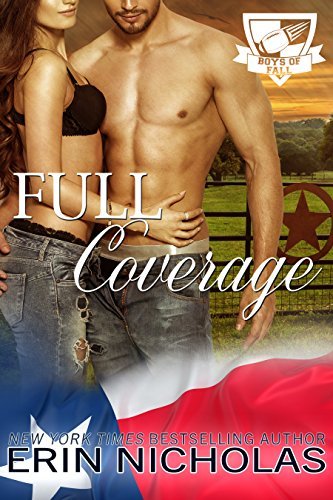 You can take the boy out of Quinn, Texas, but you can’t take the love for sexy cowgirls out of the boy. Evidently.

Nolan Winters left his hometown after high school, wanting bigger things than Quinn could offer. Years later, he’s a popular journalist, reporting stories that stir him, and also a bestselling author to boot, working on his second book—a biography about one of Texas’ most beloved football coaches, Quinn’s very own Nicholas Carr. Now Nolan’s finding himself home a lot more often. For research. Yeah. That’s the story he’s sticking to. He’s not coming home for sexy, sweet local mechanic, Miranda Doyle. Nope. Not at all.

Randi’s a born-and-bred Quinn girl, more than content to stay there forever. Football, steady work, football, family and friends, football…the small ranching town has everything she needs. And lately, something she wants—Nolan Winters. Never much of an athlete, he’s asked football fanatic Randi for help on the sports details of his new book about Coach. The ins and outs of the game. It isn’t long before Randi would rather help the hot scholar in and out of other things…like her bedroom, and definitely his clothes.

She’s a small-town, C-average ex-cheerleader. He’s a big-city, A-plus bookworm. Their differences could keep their engines running hot…or steer them straight toward a crash and burn.

Nolan stepped out of the barn into the night. The light from the party spilled out onto the dirt and grass for several feet and the noise was only slightly muted, but it took him a second to acclimate.

His eyes adjusted to the darkness outside of the circle of yellow light and he noticed that Randi wasn’t the only one who had slipped out. There was a cluster of guys off to one side, talking and laughing. They lifted their hands in greeting and he gave them a wave. There were a few couples as well. Some were just talking, others were doing a little more.

When his first scan of the immediate area didn’t reveal Randi anywhere, he rounded the corner of the barn and heard a female moan. He quickly reversed direction.

Finally he saw her. She was several yards from the barn door, perched on the top of the wooden railing that separated the barnyard from the field to the west.

She was looking out over the darkness, twinkling with lightning bugs, and lifting a beer bottle to her lips.

He said it softly, trying not to startle her. But it didn’t work. She gasped and started to turn, and the combination of the scare, the narrow piece of wood she was sitting on and the tequila apparently all hit at once. He reached her just as she started to pitch forward. He grabbed her by her belt and hauled her back up onto the fence.

For a second she just breathed. Then she twisted her head to look at him. “Holy shit, that was impressive.”

He gave her a grin. “Thank God for cowgirls who wear big-ass belts.”

She laughed. “Didn’t even spill a drop of beer.”

“Nolan Winters, what are you doin’ out here?” she asked, squinting at him in the dark.

“Well, I can’t dance with you out here. I went to look for you inside but you’d disappeared.”

No sense in letting her know that he knew every move she’d made since she’d walked into the party. That sounded creepy.

“You wanted to dance with me?”

“Of course.” Who the fuck wouldn’t want to dance with her?

“You and Lacey were dancing.”

Was there a twinge of jealousy in her voice? No. Nolan immediately shook his head. There was no way Randi was jealous of another girl dancing with him. There had never been anything between him and Randi, ever, but friendship. If she’d wanted him, she could have had him. For anything. Boyfriend, booty call, slave, minion.

“Lacey and I are just friends,” he told her. “She’s with Carter.”

“Oh, good,” Randi said-then her eyes widened as if she hadn’t meant to say that.

Nolan wasn’t sure he’d ever heard anything better from her.

He was a little embarrassed now about how infatuated he’d been with her, and he no longer felt willing to give her a kidney just for a smile, but he was still…enamored. Possibly more so now than ever, in some ways. Because now he knew what he’d been missing as a nerd who liked books better than people.

And if he had a fantasy girl, it was the one sitting drunkenly on a fence on the outskirts of Quinn, Texas.

Nolan shook his head. You could take the boy out of the small hick Texas town, but you couldn’t take his love for cowgirls out of the boy. Apparently.

It was something he’d been trying to kick for years.

But sophisticated, polished city chicks just didn’t do it for him.

Girls who wore jeans and used fuck as a noun, verb, adjective and adverb, who liked to get dirty-whether it was good old dirt and naughty in a backseat, or with wrenches and grease-who ate red meat and loved being outside, rain or shine, did it for him. No matter what he did to try to kick the addiction. 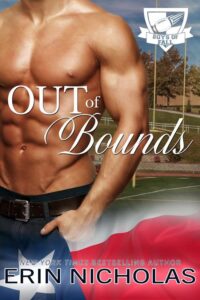 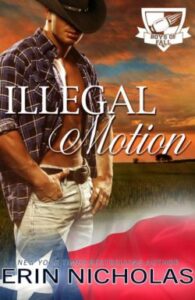